Bears continued to tear into natural gas futures for the sixth straight week, sending August prices down 87.0 cents on average for the period ending July 6, according to NGI’s Forward Look. 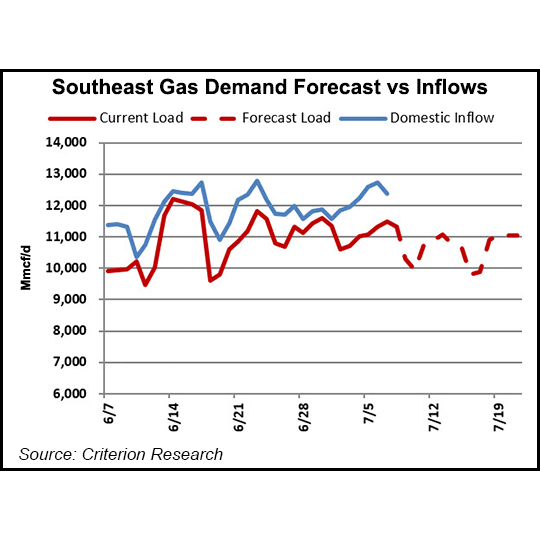 September prices put up similarly steep losses, which extended through the remainder of the summer (August-October). Notably, even the strip for the upcoming winter (November-March) dropped dramatically amid a seemingly improved supply picture in the wake of the explosion and subsequent outage at the Freeport liquefied natural gas (LNG) terminal.

However, basis trading revealed a starkly different backdrop in the Southeast, Forward Look data showed. August basis at Transco Zone 2 jumped 53.0 cents on the week to plus $7.660/MMBtu. September basis was down 18.0 cents to plus $6.790, but the decline paled in comparison to the 91.0-cent average decrease across North American markets. Similar price action extended through the winter.

[Trend Alert: Higher commodity prices seem to have spurred an uptick in oil & gas deals. Tune in to NGI’s Hub & Flow podcast to learn more about the health of the E&P market.]

Transco Zone 2 comprises all locations along the Transcontinental Gas Pipe Line (Transco) east of Station 30 in Wharton, TX, through Station 45 in Beauregard Parish, LA. NGI’s full methodology for this and other locations can be found here.

August basis also strengthened considerably at Transco Zone 3, picking up 40.0 cents through the week to reach plus $7.716, according to Forward Look. September basis was down 24.0 cents to plus $6.843 – again a smaller decline than seen elsewhere.

Speaking on The Desk’s online chat Enelyst, Criterion Research LLC’s James Bevan, director of research, said gas flows into the Southeast have been strong recently because of extreme heat sitting atop the region.

AccuWeather said a heat dome has been in place for much of July over the Southeast, with sinking air causing temperatures to climb and precipitation and cloud cover to be limited.

“When there is little to no moisture in the ground, the sun’s energy can go directly into heating the earth and does not need to evaporate water, promoting above-normal temperatures,” AccuWeather meteorologist Ryan Adamson said.

On Thursday, the heightened cooling demand resulted in net gas inflows into the region totaling 12.36 Bcf/d, according to Criterion. Though still high, Bevan noted this was a drop from Wednesday’s high of 12.74 Bcf/d.

“Our modeled demand is sitting at 11.5 Bcf/d, but that may be higher than we are seeing if we believe the strong gas burns we are seeing in other regions,” such as PJM and the Midcontinent Independent System Operator, Bevan said.

Demand in Florida, in particular, is significant. Criterion data showed pipeline deliveries for power demand ramping up to about 4.4 Bcf/d on Thursday, which beat highs seen in mid-June.

“The South Central has been sending in more than 10 Bcf/d to the Southeast in the last few days, which matches the winter rates and is well above last summer’s flows,” Bevan said.

Meanwhile, Transco had an operational flow order (OFO) in place on segments farther east on its system as the pipeline struggled with flexibility given strong flows. The OFO was put in place on Wednesday and is to remain in effect until further notice.

Transco had been flowing 3.0-3.5 Bcf/d from the South Central into the Southeast in the last few days, according to Criterion. The pipeline also increased its Mississippi Hub storage withdrawals to more than 0.3 Bcf/d while continuously pulling around 0.5 Bcf/d from Leaf River Energy Center, also in Mississippi.

“All hands on deck to move gas east,” Bevan said.

Meanwhile, Bevan warned of upcoming maintenance on Southern Natural Gas Pipeline Co., which is already being impacted by falling receipts amid the strong Southeast demand. There also were pipeline issues on Florida Gas Transmission (FGT), where flows hit nearly 2.4 Bcf/d on Thursday. This was well above the June/July 2021 rates of 2.0-2.2 Bcf/d.

Amid the backdrop of stronger gas flows heading toward the region, daily prices have risen sharply as well. Points along Transco on Wednesday surged as high as $7.550 in Zone 2, $10.350 in Zone 3 and to $10.95 in Zone 5, according to NGI’s Daily Gas Price Index. Much lower prices in the $5 range were seen at the far eastern end of the line in Zone 6, located in New York.

East Daley Capital Inc. said the higher prices have caused spreads between natural gas hubs to widen, leading to higher rates for some producers looking to book short-term capacity. For example, on Energy Transfer LP’s Tiger Pipeline, which runs from Carthage Hub across northern Louisiana and interconnects with various pipelines, historical transportation rates on Tiger average around 10 cents, with some as low as a nickel. This is because pipeline capacity is overbuilt in this region.

However, at the beginning of June, XTO Energy Inc. signed a contract at a rate of 25 cents from June through October, East Daley analyst Zack Van Everen said. While short-term contracts are common, those at a 25-cent rate are not, the analyst told NGI.

The contract indicates that gas would be received from Carthage and delivered into Enbridge Inc.’s Southeast Supply Header LLC (SESH). From there, SESH can take the gas to various delivery points south into Mississippi and Alabama.

“If we see spreads this high stick around through the summer, pipelines that were out of the money may see upside,” Van Everen said. He noted that there is space on the pipeline’s eastern route, but getting south is where there are constraints. “SESH, which connects to Tiger and heads south, is now running full.”

Another pipeline that can see upside from these spreads is Enable Gas Transmission, which has also seen higher than average rates over the last month, including a similar contract from XTO.

For all the chaos in the Southeast, the rest of the country headed sharply lower in an extended sell-off dating back to early June, when Freeport exploded and took 2 Bcf/d off the market.

With heat subsiding a bit from the record levels seen in June, recent supply data had been pointing to a vastly improved supply outlook. Even with above-normal demand, storage data indicated that stocks were benefitting from the Freeport outage, with back-to-back larger-than-expected injections.

By Wednesday, August Nymex futures had slid to $5.510.

However, things took a dramatic turn on Thursday when the Energy Information Administration (EIA) delivered another whopper of a report. This time, though, the 60 Bcf reported injection fell far short of expectations, sending prices skyrocketing higher.

Ahead of the EIA report, expectations had clustered around an injection in the mid-70s Bcf for the week ended July 1. A Reuters survey produced injection estimates that spanned 68 Bcf to 84 Bcf, with a median of 75 Bcf. Estimates submitted to Bloomberg as of Wednesday showed a median injection estimate of 75 Bcf. Predictions stretched from 70 Bcf at the low end to 85 Bcf at the high mark. A Wall Street Journal poll found an average injection expectation of 76 Bcf.

The EIA’s 60 Bcf build was on par with the five-year average and well ahead of the 25 Bcf injection seen in the similar week last year.

Broken down by region, Midwest inventories rose by a plump 27 Bcf, and East stocks added 21 Bcf, according to EIA. South Central storage increased by a net 4 Bcf, which included a 9 Bcf withdrawal from salts and a 13 Bcf build in nonsalts. Pacific stocks rose by 5 Bcf, while Mountain stocks climbed 4 Bcf.

Enelyst managing director Het Shah said the draw from salts in the South Central region was a deeper pull than he had expected. “Salts…we got a problem, especially as we enter peak summer months here.”

Looking ahead to the next EIA report, market observers on Enelyst indicated they needed some time to digest the latest storage figure. However, some said an injection in the 50 Bcf range was likely. “But this next number is on even $1 lower priced gas as today’s.”

Total working gas in storage as of July 1 stood at 2,311 Bcf, which is 261 below year-ago levels and 322 Bcf below the five-year average, EIA said.

Even before the latest EIA report, gas prices reflected a bit of lingering concerns about supply. Forward prices for summer 2023 (April-October), though lower on the week, were down a less substantial 38 cents on average, Forward Look data showed.

Meanwhile, Bespoke Weather Services said the latest weather models reflected some hotter trends for the rest of July. This, according to the forecast, is “definitely worth watching” if the gas is not as loose as the last two weeks indicated.

“It remains tough to be very confident but Thursday’s move makes sense, given we have, for now, rejected the last couple of EIA numbers,” Bespoke chief analyst Brian Lovern said. “But that doesn’t mean we need to keep screaming higher, either.”

More than anything, Thursday’s price action tells the market to expect higher volatility once again, according to Lovern.

“We honestly cannot rule out another trip back over $7.00 over the next several days, nor can we rule out a move back to where we were before Thursday. It will be a wild ride, and a tough one to navigate with all of these EIA issues/inconsistencies.”